I wrote a post earlier in which I explained a conference our school recently hosted called Lausanne Learning Institute of the Southwest. A conference in which we offered a day of general sessions and a day in which fishbowl sessions occurred on our campus with our students. To read that post, click here.

Day 1 of the conference offered a new twist on conference style learning. I have attended many conferences/workshops in the past that have ranged from sit-and-get to general sessions that actively engage and involve the audience. However, I have never attended, nor have I actually heard of, a conference offering a fishbowl type setting in which students are taught in front of your very eyes. 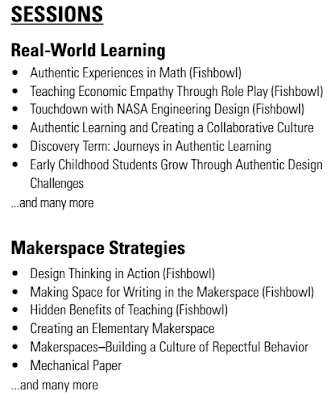 According to the immediate feedback we received from our participants, the fishbowls were a huge success. Teachers mentioned that rarely do we get to see ideas in action, so this was an interesting way to run a conference. Educators mentioned that they loved the fact that they could see a lesson in action and then were given time to debrief, share other ideas, or ask questions amongst a group of fellow educators. The feedback we received from the students included quotes such as:
Planning for a fishbowl setting during a conference was no easy task. We asked the presenters for their topic, a brief description of what will be occurring during the session, grade level, and prior knowledge in order to create the schedule for the day. The challenge, on top of the fact that it was a "normal" day of school with our normal 900 or so people on campus, was that we were adding 200 additional people to a flexible schedule. We ended up silencing all bells for the day and had someone announce on the loud speakers when to rotate. Although the schedule was an ever changing document that took months to create, it ended up being executed flawlessly.

Participants reflected upon the fact that they enjoyed the fishbowl setting, topic selections, and flow of the schedule. Based upon feedback from participants as well as our own observations, we plan to make some minor adjustments next year, such as:
Some feedback from our participants: